Korn wrapped up their second of a two night sold out run at the newly remodeled House of Blues. The venue, now located at the new Garden Walk in Anaheim, was a great site to host this iconic band. They played a great mixture of songs spanning their almost 25 year career. “Here to Stay,” “Shoots and Ladders,” “Blind,” and “Falling Away from Me.” were some highlights from the night. The crowd was as aggressive as the music that was coming from the stage and went to a new level of intensity when singer, Jonathan Davis, came out with his bag pipes during the opening of “Shoots and Ladders.” They kept the energy going into Ray Luzier’s drum solo before being joined by the rest of the band for “Blind.”

Korn put on a fantastic, high energy show. From the first note, to the last chord of the night, guitarists Munky and Head had their signature dreadlocks whipping around as they churned out memorable riff after riff on their detuned 7 string guitars. Bassist, Fieldy, was awesome as he rattled the venue with his thunderous slap bass style.

The band will head off to Europe before returning the states in late Spring for a tour that will take them into Summer. Don’t miss out on catching them when they are in your area. 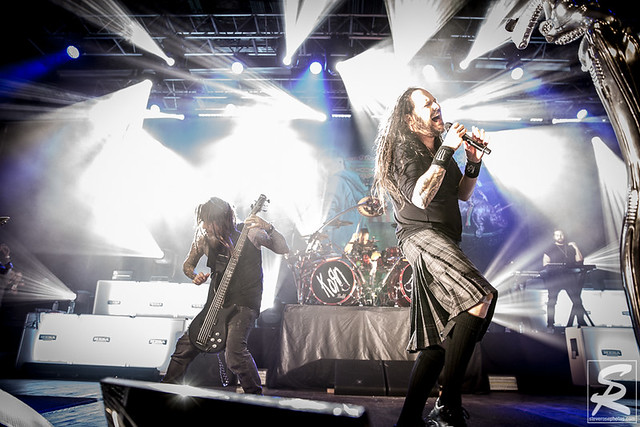