Heart Doesn’t Miss a Beat at the Hollywood Bowl

It’s always special to see a show at the historic Hollywood Bowl and the Heart show on Friday was almost magical. The Hollywood Bowl Orchestra, led by conductor, Thomas Wilkins, joined the Rock and Roll Hall of Famers in a magical night. The band and orchestra opened with the first of two Led Zeppelin covers of the evening. The first was Kashmir and I think it was a great way to kick off the show. The mix of the band with the orchestra on this particular song was pure sonic nirvana. The way horns and strings accented and accentuated particular parts really brought a lot of definition to the music. They later closed their set with Stairway to Heaven.

Ann Wilson is a fantastic singer, and on this song she could’ve given Robert Plant a run for his money on any given day. Throughout their 90 minute set, Heart played a great mixture of chart topping hits and fan favorites. Some of the highlights, aside from the Zeppelin covers, were Kick It Out, Even It Up, and (obviously) Crazy On You. Another notable cover was Elton John’s, Mona Lisa’s and Mad Hatters sang by Nancy Wilson. During this song, she used her signature Martin HD-35. Nancy played a couple of Martins, Fenders, and a great Duesenberg Starplayer throughout the set. I can easily say that her Duesenberg was my favorite; it’s such a cool looking guitar. To close the set, the band also played a fantastic version of Stairway to Heaven, which featured Nancy handling the rhythm parts and lead guitarist, Craig Bartock handling those identifiable lead lines on this iconic song.

Heart is a high energy, high output, high caliber rock and roll band that simply puts on a great show. To see this band with the Hollywood Bowl Orchestra was a real treat. The Wilson sisters feed off of each other’s energy and it really comes through with their performance. If you haven’t seen them live, you really should. And if you have, then you know what I’m talking about.

Barracuda
Crazy On You 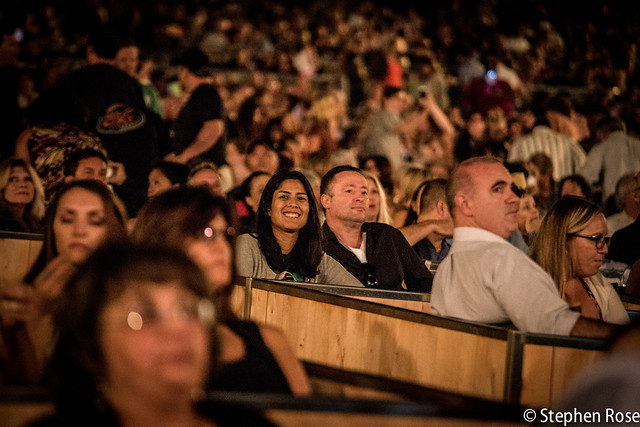